Looking at the World of Cannabis Science, Health and Wellbeing Through a Doctor’s Lens

Cannabidiol, in short CBD, is an organic plant compound called a phytocannabinoid derived from flowering plants in the Cannabaceae family, which consists of three main species called Cannabis sativa, Cannabis Indica and Cannabis ruderalis. It is the second most abundant phytocannabinoids in the cannabis plant after THC. 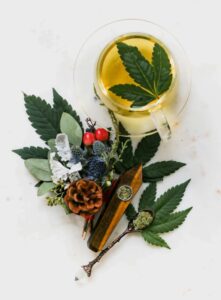 What is the difference between Hemp and Marijuana?

Hemp and marijuana are both strains of the cannabis family. The difference is primarily made up for regulatory purposes and is actually nonsense from a biological standpoint. What separates hemp and marijuana is the ratio of CBD and THC in the plant. In Europe, industrial hemp can contain no more than 0,2 % THC. Industrial hemp has been used to make fabrics for thousands of years. In cannabis strains used for marijuana or medicinal cannabis, the plants have been cross-bred for decades to yield as much as up to 20% THC in some strains. Most cannabis strains are containing CBD as well as THC in different ratios. To clarify the topic: Both hemp and cannabis are derived from the Cannabis plant family, and they are only differentiated by the amount of THC.

Is there THC in the CBD products I can get today?

In most countries in Europe today it is not allowed to sell supplements containing THC, and therefore the CBD products should be totally THC-free. This is, however, not always the case, and you might find up to 0,2 % as above mentioned. This comes down to the fact that food supplements do not have to undergo testing for their chemical compounds. This leaves the consumer with a huge responsibility as you really need to be conscious of asking the right questions about quality control, growing conditions and third-party testing.

Can CBD be different based on the cannabis strain it comes from?

CBD is an organic plant compound, and the chemical structure is always the same no matter which plant it comes from. The thing that can vary is the content of other cannabinoids, terpenes and carrier oils in the product which can attribute to a somehow different effect even with the same dosage of CBD in various products.

Do you find other things in the cannabis plant?

CBD is one out of around 144 phytocannabinoids (still counting) produced in the cannabis flower in a round structure called the trichomes. CBD is along with THC the main cannabinoids to be built in the oily centres of the trichome, along with smaller amounts of other types like CBG and CBC. To date, there have been identified a total of 545 compounds in the Cannabis Sativa plant, including, among others, the cannabinoids mentioned earlier, and terpenes; the essential oils giving cannabis it’s distinct smell.

What is the difference between THC and CBD?

The difference between the two cannabinoids comes down to them working in different ways in the brain, resulting in entirely different effects on the body. THC, which is probably most famous for its ability to make you “high” is associated with potential drug dependency and psychiatric adverse effects like paranoia, psychosis and schizophrenia. CBD, on the other hand, has no addictive potential and is not linked to any adverse mental health outcome. CBD has recently gained popularity for its potential health applications.

How does CBD work?

To understand how CBD works, we have to look at the chemical structure. The phytocannabinoids (phyto meaning of a plant) have a striking similarity to a group of lipid-based neurotransmitter produced in the body, therefore called endocannabinoids (endo meaning made in the body). A neurotransmitter works in the nervous system as a signalling molecule. It binds to its target, the receptors on nerve cells called neurons, to mediate a biological process in the body. The receptors that the endocannabinoids and the phytocannabinoids bind to are called endocannabinoid receptors, and together they form the endocannabinoid system (ECS). The ECS plays an essential role in maintaining bodily homeostasis. Homeostasis is vital to keep things like blood sugar, blood pressure, temperature, pH value and hormonal levels in an optimal range, that is to say, keep these systems within working conditions. To summarise it, cannabinoids, including CBD, is partly working through naturally interacting with our ECS and other receptors like the 5HT1 serotonin receptors.

What does the endocannabinoid system do?

As described above the endocannabinoid system is involved in regulating a wide range of biological mechanisms like mood, memory, stress, sleep, appetite and digestion, reproduction, body temperature pain and immune function.

Which receptors are the endocannabinoids working on and where are they located in the body?

What do these receptors do?

Now let’s get really geeky: In the entire nervous system, the signalling is happening between two neural cells called neurons in a place called the synapse (the area between two nerve endings). The presynaptic neuron (the first neuron delivering a message) is usually releasing a neurotransmitter in the synapse which is then binding to receptors on the postsynaptic neuron (the neuron receiving the message). Eventually, travelling through several neurons and synapses, the signal reaches the organ that needs regulation, e.g. the heart, kidney or the intestines.

The endocannabinoid system works through something called retrograde neurotransmission, which can be seen as a feedback loop to regulate the original message. The CB1 receptor is located on the presynaptic level, and when the endocannabinoids produced in the postsynaptic neuron are being released into the synapse, it travels back and binds to the CB1 receptor on the presynaptic neuron. This inhibits the release of neurotransmitter (either GABA or Glutamate) which in turn inhibits the electric firing from the postsynaptic neuron. This is how the ECS works to regulate the biological processes in the body by essentially turning down the volume on the neural cells in the ECS.

Confused? We are discussing complicated biological processes here, but most important is to remember that cannabis works on an existing regulatory system in the body, by binding to the CB1 and CB2 receptors of the endocannabinoid system.

What happens to the endocannabinoids after they are released?

After binding to the CB1 and CB2 receptors, the endocannabinoids are quickly broken down by the so-called metabolic enzymes, another part of the ECS. 2-AG is broken down by the enzyme MAGL and anandamide by FAAH. This is to make sure that they do not overstimulate the receptors after having mediated the effect.

How does CBD and THC work on the endocannabinoid system?

THC works primarily by directly binding to and activating the CB1 receptors in the brain like a key in a lock. When THC activates the CB1 receptor, the main action is for the receptor to decrease the activity. Hence, many effects of THC are caused by reducing the activity of specific pathways in the brain. Some examples can be reduced pain perception and impaired memory and learning skills.

CBD works on the CB1 and CB2 receptors in a more indirect way. When CBD binds to the CB1 receptor, it is not like a key in a lock, and the effects are the opposite of when THC binds. CBD has indeed been shown to balance out the effects of THC when taken together.

CBD also works indirectly on CB2 receptors by making sure that adenosine, a molecule released to suppress the immune system during inflammation, is more available for binding to the CB2 receptors. This leads to immune-suppression and can explain the anti-inflammatory effects of CBD.

It is essential to notice that CBD can bind to, and regulate a wide range of other receptors like the 5-HT1A serotonin receptor, TRPM8 ion channels, TRPA1 and 4 ion channels and many more. This is part of the explanation for the many observed effects of CBD, and we still need to investigate these effects further in the future.

All references are from the extensive work by one of our leading cannabis expert, Professor Roger Pertwee and can be found in the Handbook of cannabis (1).

⚠️ If you’re taking other medication for anxiety or any other condition, it is important that you consult with your GP before trying CBD oil.

Visit her website here for related articles and information: www.getthedose.com

All advice given out by Dr Piper and Privategp.com is for general guidance and informational purposes only. Readers are encouraged to confirm the information provided with other sources. Patients should review the information carefully with their professional health care provider. The information is not intended to replace medical advice offered by other physicians. Dr Piper privategp.com will not be liable for any direct, indirect, consequential, special, exemplary, or other damages arising therefrom.

What our patients say


You are unique and we are ready to listen